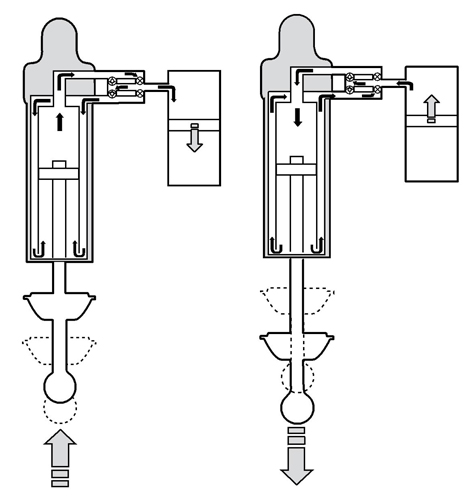 The name stands for Twin Tube X-over, the cross over part comes from the fluid path over the valves. Rather than flowing fluid through the piston with ports and shims like the single tube shocks, the TTX normally has a solid piston (there are some exceptions).

In rebound direction (pictured right) the fluid passes out of the inner cylinder, up the outer tube, through the rebound adjuster valve, then the compression check valve (crossing over the compression path hence TTX) and finally in the upper side of the piston. The fluid that needs to be replaced as the shaft moves back out of the cylinder returns back from the reservoir.

Ok, but what difference does that make?

More powerful adjustment; due to the much larger amount of fluid passed through the valves, the adjusters have a greater effect especially controlling small movements as they are able to build pressure faster.

Independent adjustment; a change on one adjuster doesn’t affect the other’s flow (unlike the rebound adjuster on single tube shocks).

Less risk of cavitation; because of the nitrogen pressure being applied to fluid both sides of the piston the risk of the fluid going into negative pressure is reduced, it also means the pressure inside the reservoir can be less than half of a conventional shock in most instances, all this increases the sensitivity of the shock (it doesn’t have to push as hard against the gas force) and also helps internal friction.

As the name suggests these have one tube that the piston rod moves inside, passing fluid through the rebound adjuster in the centre of the shaft in low (shaft) speed and when this reaches maximum flow, through the shim pack (shims are precision made thin steel washers).
Also, as the rod moves inside the body of the shock it has to displace the same amount of fluid out, this is taken care of by a floating (separating) piston that is inside the remote reservoir. In between the rod and floating piston (on two way adjustable shocks) there is another shim pack and adjuster which only controls fluid flow out to the reservoir, therefore controlling compression.
Inside the reservoir the far side of the floating piston is filled with high pressure nitrogen, this is to hold the fluid in a positive pressurised state so any large inputs in the suspension don’t allow the portion underneath the piston to go into negative pressure (cavitate) or just push the fluid to the reservoir.

Automotive shocks like the TTX40 and 46 have a rod that continues through the piston and right out of the other end (similar to a steering damper). This makes the shock a lot less sensitive to side loading as the shaft is supported by bushes at opposing ends of the body. Also, as you don’t have any displacement change, as the damper goes into compression stroke there is no gas force to push against, making the damping more sensitive.

Compression or bump – the wheel’s movement direction toward the chassis

Rebound – the wheel’s movement direction away from the chassis

Cavitation – when pressure inside the shock drops too low and causes a hole to be pulled in the oil. This causes foaming and momentarily drops damping forces (just when you need it!)

Hysteresis – is ‘free play’ or ‘lag’ in the damping. If a damper has a lot of hysteresis it doesn’t build pressure quickly and provide sufficient damping to control small movements. This can mean rather than controlling the mass before it gets momentum the damper has to be made harder and therefore reduces ride quality.